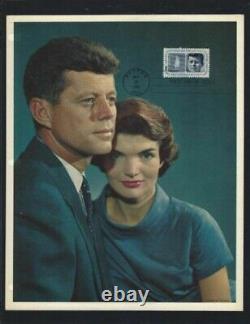 Issued ON his First Birthday after his death, to commemorate his Life. Very Rare Print on Heavy Stock. Occasional hints at age of stock (at least 50 years old), such as slight toning (nearly imperceptable). Fine Paper and Inks, see how remarkably well they've held up for half Century Plus.

Multiplied Thousands of feedback comments in a dozen languages, in praise of our. How can they do it?

That the bonus stamps were a thrill for me. It turns out that almost all the cheapest stamps you sent me. Were better than the ones in my collection.

I spent an entire afternoon scanning them and comparing them. It was more fun than I have had in a long time. They were so much fun!

I received the First Man Moon Landing Maximum Card and it is just excellent. Also, there was an extra surprise of little packs of stamps.. Many of which are space stamps.

A A A + + +. China ROC C73 Taiwan Plane Jet Pitan Bridge Kiai Sinchu MNH August 14 1963 Air (#181597269747). Please remember to consider these valuable bonuses and benefits. Backed by our spotless track record of Value, Service, and Communication. And Proven by our long list of hundreds of glowing feedback recommendations. Executive Summary: Everything is in YOUR favor. Your only risk is missing out on a prized acquisition. StampTLC certifies the authenticity of these stamps and other collectibles, without reservation or qualification, based on their history -- whether they have been in our family collection continuously since date of issue or early acquisition, or since their value was insignificant; or, on occasion, acquired from reputable dealers; and we further certify, that none of them has ever been modified or repaired at any time, in any way. This item is in the category "Stamps\United States\Covers\FDCs (1951-Now)\1961-70". The seller is "stamptlc" and is located in this country: US.

This item can be shipped worldwide.