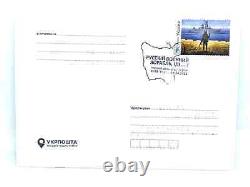 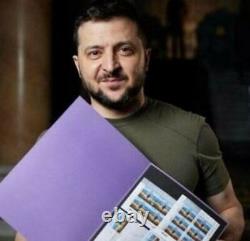 You are being offered one of the 20,000 OFFICIAL FIRST DAY COVERs hand-cancelled in the capital city of Kiev on the first day of circulation. BEWARE OF OTHER SO-CALLED "FDC's" WITH DIFFERENT MOTIFS, STAMPED ELSEWHERE OR ON A LATER DATE! On February 24th 2022, the first day of the Russian invasion, Snake Island, a small Ukrainian island in the Black Sea off the coast of Odessa was attacked and taken by the Russian Navy, along with its 13-man garrison. The attack was widely publicized when an audio clip showed the Russian Navy flagship "Moskva", subsequently sunk by Ukrainian missiles on April 14th, calling upon the island's defenders to surrender and being answered with a defiant middle finger and Russian warship, go fk yourself! The island was captured but the garrison troops were later released in a prisoner swap. Russian warship, go fk yourself! Since became a rallying cry for all the brave Ukrainian people and in March, the Ukrainian government announced that the Post Office would issue a commemorative stamp honoring the Snake Island soldiers. Artist Boris Groh's design of a Ukrainian soldier standing on a beach and giving the finger to the Russian warship was finally selected for this singular stamp, which was put into circulation on April 12th. On April 19th, the postal authorities announced that these stamps would not be reissued, meaning that the stamps and, even more so, the precious few first day covers, are becoming increasingly valuable and the most sought-after philatelic collectibles of the century! This item is already safely across the border and inside the E. This item is in the category "Stamps\Europe\Ukraine". The seller is "hotelco" and is located in this country: ES. This item can be shipped worldwide.